Virginia is for Lovers Holiday Ornament 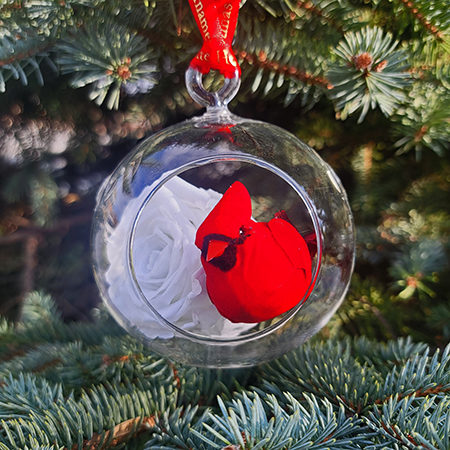 Virginia state bird is for lovers. The ornament honors the northern cardinal as the most romantic bird species. Male cardinals can be spotted with their vivid crimson feathers, a long tail and a pointed crest on the top of their heads. When the male spots a tan feathered female, he may commence in performing a courtship song and dance display. He will also express affection feeding the females seeds with thier thick, bright orange, cone-shaped beak. the northern cardinal is also the official bird symbol of Illinois, Indiana, Kentucky, North Carolina, Ohio, and West Virginia.

The Virginia is for Lover's ornament also features the Glory White House Rose symbolizing purity and loyalty of true love. Virginia is considered to be one of the most romantic and enchanting placesfor a honeymoon or anniversary. With its rolling mountains and beach-front resorts, Virginia has everything a couple needs to enjoy some special time together.