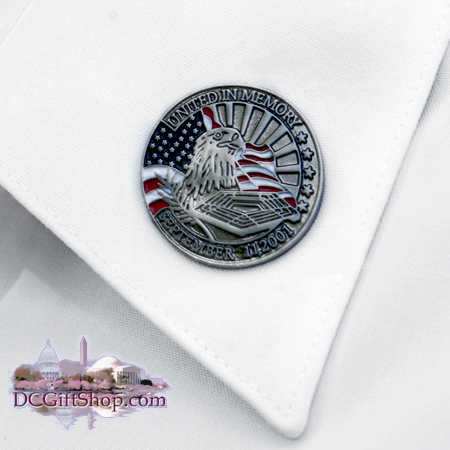 
To commemorate the fateful day ten years ago, we humbly offer this lapel pin so you can show your support for 3,000 men and women who lost their lives that tragic day in 2001 In a series of coordinated suicide attacks, the terrorist group Al-Qaeda managed to kill nearly 3,000 victims from over 70 different countries. The mastermind behind the attacks, Osama Bin Laden, was hunted for nearly a decade and brought to justice (killed) in May of 2011.

This lapel pin commemorates that fateful day 10 years ago with an American bald eagle situated in front of an American flag with a likeness of the Pentagon on the bottom right. Pin measures one inch across and flag is painted red, white and blue.