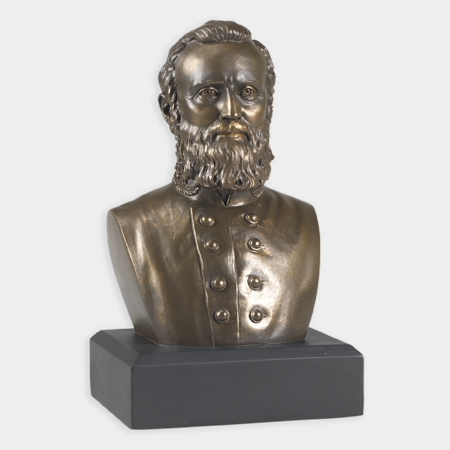 
Jackson was born on January 21, 1824 in Clarksburg, Va. His graduation from West Point in 1846 was the beginning of an illustrious military career. Well known for his success in war and his quality leadership abilities, "Stonewall" Jackson made history. He became a Major General due to his many victories against the Federal troops; gaining wide approval from those in powerful positions at that time. This prevalent bust of Stonewall is carved in likeness of the man perfectly. Every detail is included within this artistic rendition, illustrating him to be a man of defined character and presence. This elegant bust depicts him as his time when he was a General, not before. This is evident in the clothing that is illustrated in exquisite bronze alloy. The eyes themselves portray emotion, allowing for that hint of what his character might have been like. It was the outstanding leadership qualities of such a man that lead America to brilliance. This piece just quietly acknowledges that.