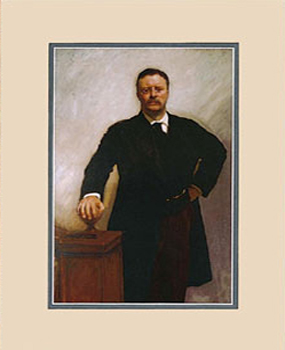 
If a person doubts the ability of Sargent to capture the essence of the man or woman, then they have only to look at the Portrait of President Theodore Roosevelt. It was informal but strong. It was modern but respectful. It was exactly what Teddy Roosevelt wanted and he would adore the portrait for the rest of his life. It had exactly captured, in the President's eyes, the essence of his energy as well as his presidency.

The official presidential portrait of Theodore Roosevelt, painted by John Singer Sargent in 1903, captures the physical vitality and self-assured character of our 26th president. The painting now hangs in the East Room.

Theodore Roosevelt Framed Print is approximately 13 -3/4" x 17 -3/4". If you are a fan of Teddy then you must have this historic print.