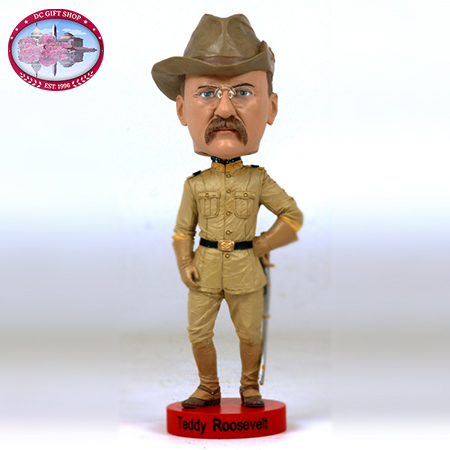 
This 7 inch rendition of Theodore Roosevelt is a prime collector's piece for those who favor the bobble head toys. Roosevelt was the nation's 26th president, and was well known for his exuberant charm and personality. This mini replica of the man does quite well to illustrate ever detail, from his tiny spectacles to his stance. He appears almost ready to speak on this collector’s piece. He was very robust and definitely keen on speaking his mind. He is certainly represented well, almost as he was in real life. This timeless toy is crafted with excellent quality detail. Most would say that it almost presents the man with stern resolve. The resemblance is perfect.

Theodore was awarded the Nobel Peace Prize, and even the Teddy bear is named after him. He could have been considered a compassionate leader, yet one filled with great resolve as well. He was the first, of only two other presidents awarded the Nobel Prize. He was also the leader of the reform faction for the Republican Party.