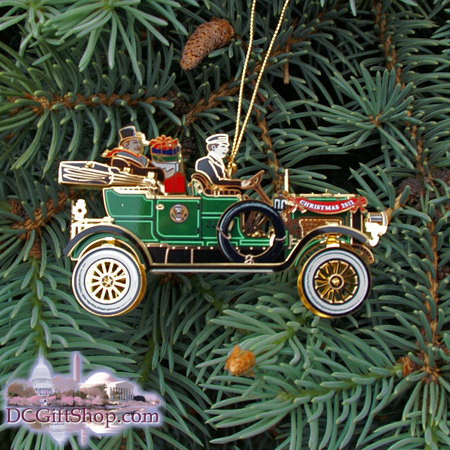 
President William Hoover Taft, the 27th President of the United States, was a lover of both inventions and machinery. The 2012 White House Christmas Ornament celebrates his passion as well as the rest of his administration.

Featuring President Taft and his wife riding in the first automobile used to transport the President and his family, the 2012 White House Ornament depicts the two riding in the 1909 White Motor Company's Model M to deliver presents on Christmas. The green, seven-passenger, steam-powered automobile shown here completely replaced the horse-drawn carriages that had traditional transported the President and the First family.

Before he became President, William Taft was appointed Secretary of War by then-President Theodore Roosevelt in 1904. Roosevelt and Taft were close friends and this appointment was made to help groom Taft to follow Roosevelt and his hand-picked successor to the Presidency. Through Roosevelt's support as well as a wave of popular support to the Republican Party, William Hoover Taft easily won his bid for becoming the 27th President of the United States in 1908.