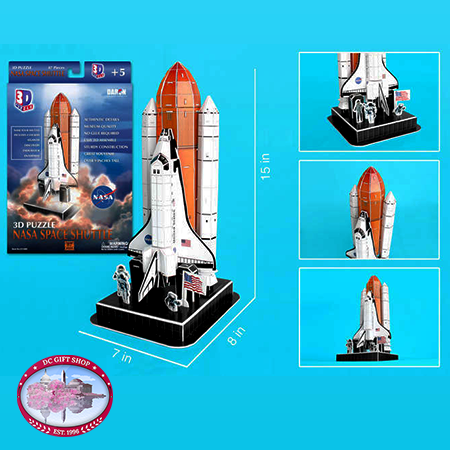 The most beautiful and famous landmarks in the world are now yours to have in your home. Incredibly detailed, fun to assemble and beautiful to display. Collect them all! 87 pieces. 11" W x 8.26" D x 7.5" H.

NASA's space shuttle fleet began setting records with its first launch on April 12, 1981 and continued to set high marks of achievement and endurance through 30 years of missions. Starting with Columbia and continuing with Challenger, Discovery, Atlantis and Endeavor, the spacecraft has carried people into orbit repeatedly, launched, recovered and repaired satellites, conducted cutting-edge research and built the largest structure in space, the International Space Station. The final space shuttle mission, STS-135, ended July 21, 2011 when Atlantis rolled to a stop at its home port, NASA's Kennedy Space Center in Florida.

As humanity's first reusable spacecraft, the space shuttle pushed the bounds of discovery ever farther, requiring not only advanced technologies but the tremendous effort of a vast workforce. Thousands of civil servants and contractors throughout NASA's field centers and across the nation have demonstrated an unwavering commitment to mission success and the greater goal of space exploration.