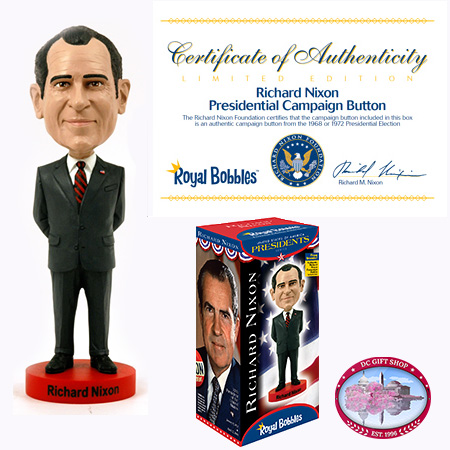 Richard Milhous Nixon (January 9, 1913 - April 22, 1994) served as the 37th President of the United States from 1969 to 1974, when he became the only president to resign the office. He served as vice president for eight years. He waged an unsuccessful presidential campaign in 1960, narrowly losing to John F. Kennedy, and lost a race for Governor of California in 1962. In 1968, he ran again for the presidency and was elected.

This limited edition of Richard Nixon bobblehead features a genuine campaign button from the 1968 or 1972 Nixon presidential campaign – and includes a Certificate of Authenticity from the Nixon Library, And it’s certainly one of those items that any bobble head collector will be proud to obtain.