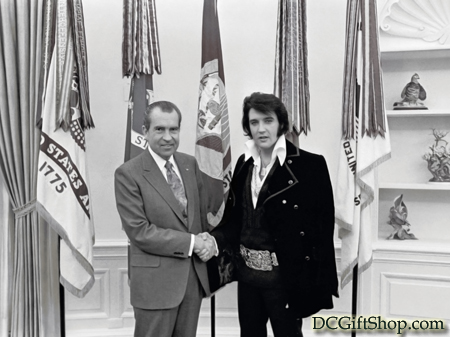 
On December 21, 1970, at 30 minutes past noon, Rock star Elvis Presley and President Richard Nixon had a meeting in the White House Oval Office.

The meeting opened with pictures taken of the President and Elvis Presley. The President mentioned that he thought Presley could reach young people, and that it was important for Presley to retain his credibility. Presley indicated that he thought the Beatles had been a real force for anti-American spirit. He said that the Beatles came to this country, made their money, and then returned to England where they promoted an anti-American theme. The President nodded in agreement and expressed some surprise.

Presley also indicated to the President in a very emotional manner that he was "on your side." Presley kept repeating that he wanted to be helpful, that he wanted to restore some respect for the flag which was being lost. He mentioned that he was just a poor boy from Tennessee who had gotten a lot from his country.

At the conclusion of the meeting, Presley again told the President how much he supported him, and then, in a surprising, spontaneous gesture, put his left arm around the President and hugged him.

Following his meeting with the President, Elvis Presley and his bodyguards ate lunch with Egil Krogh in The White House Dining Room. Presley received his badge that afternoon from the Bureau of Narcotics and Dangerous Drugs.

Several days later, the President sent Elvis Presley a warm thank you note with best wishes of the new year.