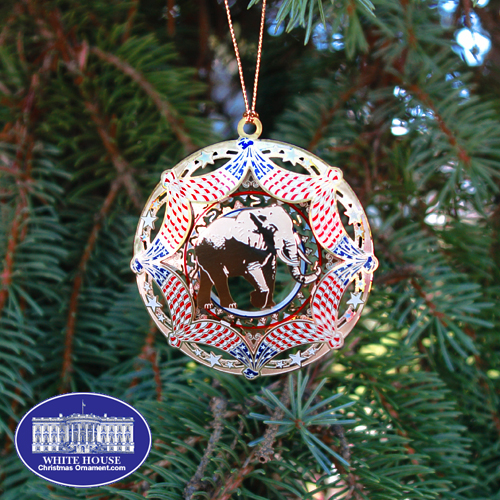 The symbol of the Republican Party is the elephant. In the spring of 1874, the New York Herald printed an editorial raising the cry of Caesarism against President Ulysses S. Grant. The Herald falsely believed that Grant would attempt to run for an unprecedented third term in 1876.

Herald editorial writers apparently felt this would have overthrown the unwritten rule that presidents served only two terms, making Grant a dictator. Despite its falseness and rumors that the Herald had printed the editorial only to gain publicity, the idea was used by Democrats that year to scare Republican voters away from the party in Congressional elections.

About the same time, the New York Herald concocted another scheme to increase its circulation. The paper printed a fabricated story that wild animals had escaped from the Central Park Zoo and were roaming the city looking for prey.

Seeing an opportunity to use both the Caesarism charge and the animal scare, cartoonist Thomas Nast produced a cartoon which appeared in Harper's Weekly on November 7, 1874. Nast drew a donkey (the symbol of the Democratic Party for which Nast was also responsible) clothed in a lion's skin, scaring away the other animals in the park.

Among the animals in the cartoon is an elephant, labeled "The Republican Vote." Nast chose the elephant because it was believed that elephants were clever, steadfast, and easily controlled, but unmanageable when frightened.

The Official Republican National Committee elephant ornament is sure to provide a festive reminder of the Grand Old Party. You can display your Republican sentiments on a desktop, mantle, or holiday decoration.