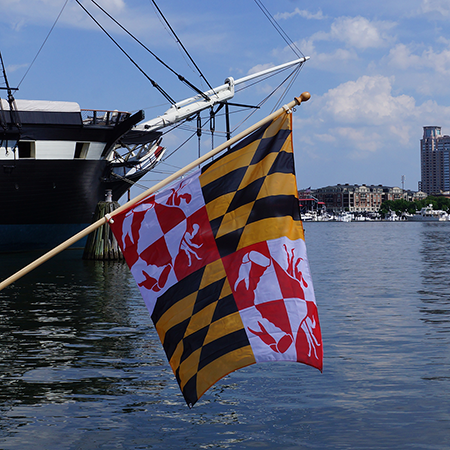 
Our Maryland Crab Flag will be the talk of the neighborhood. The flag features The design of the flag comes originates from the shield in the coat of arms of the Calvert (Lord Baltimore) and Crossland families. The black and gold Calvert colors in upper left and lower right and the red and white Crossland colors on the upper right and lower left. Two crabs have been added to the to the red and white crosses to honor the centuries-old practice of blue crab fishing in Maryland's Chesapeake Bay.

During the American Civil War Marylanders that joined the Union represented themselves with the Calvert Black and White banner, while those that joined Confederacy adopted the Crossland red and white cross. After the war Maryland decided to that both coat of arms would be used to unify the state.

Four grommet holes are on the flag, so it can also be hanged on a wall.