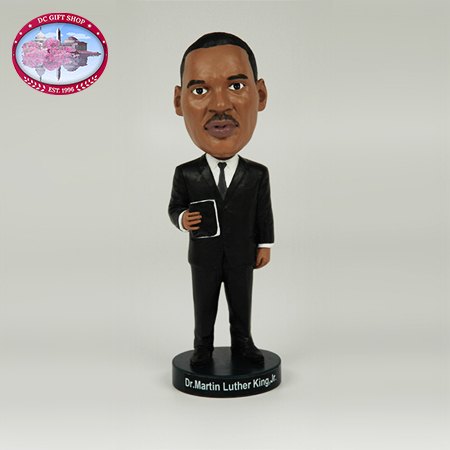 
Known worldwide as an activist for civil rights, Martin Luther King holds a profound role in the hearts and minds of many people all over the world. He was assassinated at 39 years of age; sadly, before seeing many of his ambitious dreams come to light for African Americans. This prestigious bobble head makes the perfect give around the time of year that falls right at Mr. King’s birthday. It is also perfect for the profound collection series of “American Hero’s,” because indeed King was truly one of them. The creativity, along with the top-quality composite materials allows this bobble head to go unrivaled, with regard to the riveting details. It is possible to say that the artistic creation allows for a softer replication of the genuine man himself. In 1964, King was the youngest man to have received the Nobel Peace Prize. He was compassionate and held empathy for others. King was big on non-violent movements and attempted to express that to those closest to him. Now, this bobble head leaves him dressed to impress, and holding his all popular look of inspiration. This is also ideal for collectors as a standalone item, or among other bobble head collectibles. The bobble head of Martin Luther King Jr. preserves the priceless memory of this activist for rights for all. It is one of those to be amazed by when reminiscing on how times have progressively changed.