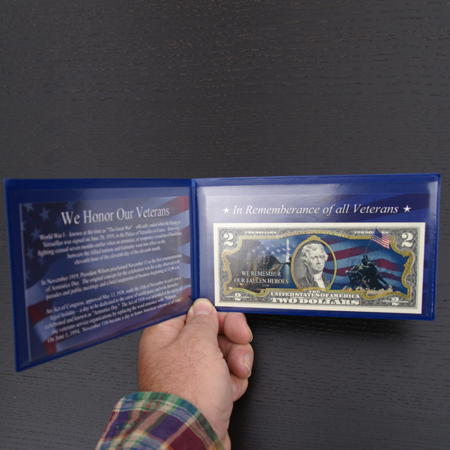 
World War I – known at the time as "The Great War" - officially ended when the Treaty of Versailles was signed on June 28, 1919, in the Palace of Versailles in France. However, fighting ceased seven months earlier when an armistice, or temporary cessation of hostilities, between the Allied nations and Germany went into effect on the eleventh hour of the eleventh day of the eleventh month.

In November 1919, President Wilson proclaimed November 11 as the first commemoration of Armistice Day. The original concept for the celebration was for a day observed with parades and public meetings and a brief suspension of business beginning at 11:00am.

An Act of Congress, approved May 13, 1938, made the 11th of November in each year a legal holiday - a day to be dedicated to the cause of world peace and to be thereafter celebrated and known as "Armistice Day." The Act of 1938 was amended at the urging of the veterans service organizations by replacing the word armistice with "Veterans." On June 1, 1954, November 11th became a day to honor American veterans of all wars.