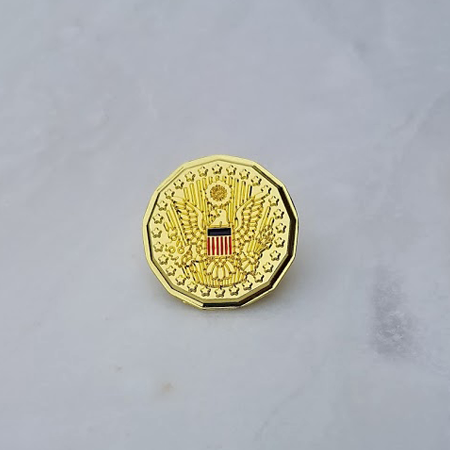 
The most prominent feature is the American bald eagle supporting the shield, or escutcheon, which is composed of 13 stripes, representing the original States, and a top which unites the shield and represents Congress. The motto, E Pluribus Unum (Out of many, one), alludes to this union. The olive branch and 13 arrows denote the power of peace and war, which is exclusively vested in Congress. The constellation of stars denotes a new State taking its place and rank among other sovereign powers

Over the head of the eagle, a golden glory is breaking through a cloud and surrounding a constellation of thirteen stars on an azure field.

Accessorize your suit with the Great Seal lapel pin. Polished gold electroplate, 7/16 with ball clutch. Worn on a suit, or blazer, the Great Seal Lapel Pin provides a conservative touch to any business, or casual attire.

Complete your attire with our Great Seal Cufflinks. 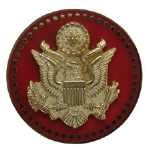