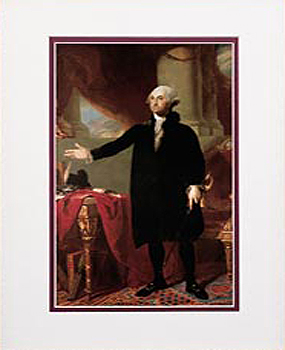 
Gilbert Stuart was one of 18th century America's master portrait artists. Stuart is best known for his portrait of George Washington, which has been the identifiable image on the U.S. dollar bill for over a century.

George Washington stands before you in a full-length portrait by Gilbert Stuart. The painting, done for the White House in 1797. Thanks to its famous rescue by Dolly Madison it survived the burning of the White House by the British in 1814. It now hangs in the East Room. Framed.

George Washington framed art print is Approx. 14" x 18" and makes a fine additon to any home or office.