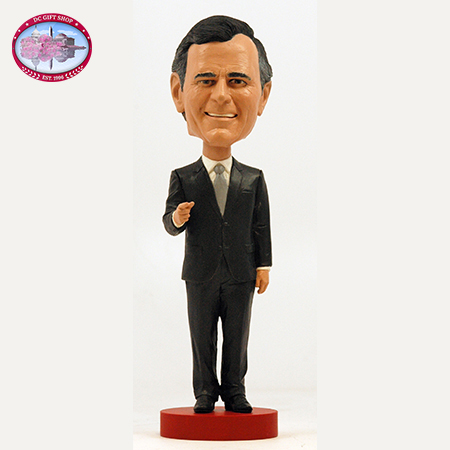 
George H. W. Bush was our 41st President, who served only one term in office. The bobble head is the perfect image of this past President. The detail and craftsmanship is near perfect, offering those lovers of history a look back in time. Bush took office directly after the Cold War ended, when there was an appeasement between Russia and the United States existing. Before George H. W. Bush became the 41st President, he served as President Ronald Reagan’s VP for two consecutive terms. Since Bush did come from a family who consistently served the public through political service, he was more than eager to work to make a difference for his country. This craftsmanship preserves history perfectly. The real likeness of this past President is original and shows the authenticity of the real man in every created wrinkle and line in the bobble heads face. The highest quality resin helped to develop this collector’s piece, and this one comes created just for those who are delighted by the time frame and are interested in the past in general.