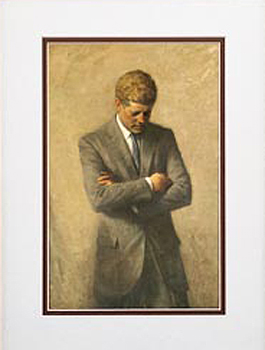 
John Fitzgerald Kennedy (May 29, 1917 - November 22, 1963), often referred to as Jack Kennedy or JFK, was the 35th President of the United States (1961 - 1963). Considered an icon of American Liberalism, Kennedy is the youngest person ever to be elected President of the U.S., at the age of 43. As of 2005 he is also the only Roman Catholic ever to become President, the first president to serve who was born in the 20th century, the last Democratic Party candidate from a Northern state to be elected President and the last to serve as a U.S. Senator immediately before becoming President. This posthumous portrait of President John F. Kennedy by Aaron Shikler was painted in 1970 and now hangs in the White House Entrance Hall. Print comes with a gold frame. The John F. Kennedy Framed art print is approximately 14 1/2" x 18 1/2". If you are a Kennedy fan then you must have this famous art print. This print takes 3-4 weeks to be delivered.