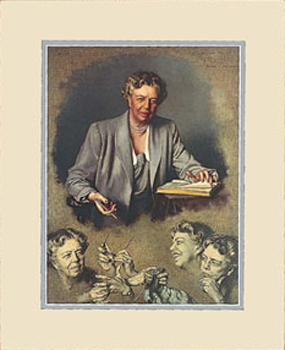 Anna Eleanor Roosevelt (October 11, 1884 in New York City - November 7, 1962 in New York City) was an American human rights activist, statesman, journalist, educator, author, diplomat and as the wife of President of the United States Franklin D. Roosevelt, the longest serving First Lady of the United States from 1933 - 1945. An active First Lady, she traveled around the United States promoting the New Deal and visited troops at the frontlines during World War II. She was a first-wave Feminist and an active supporter of the American Civil Rights Movement.

This portrait of Eleanor Roosevelt that conveys her many moods and boundless energy was painted by Douglas Chandor, in 1949. The painting now hangs in the Vermeil Room. Print comes with a gold frame.