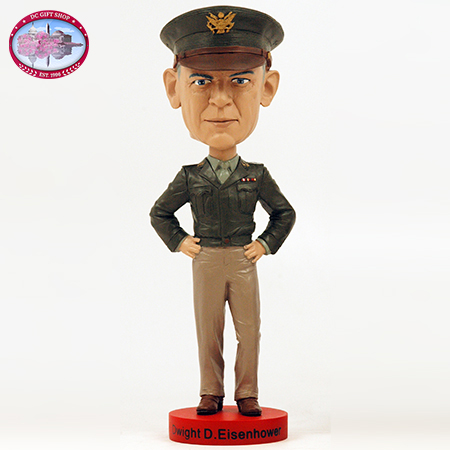 
Eisenhower was the 34th President of the United States and served from 1953 to 1961, two consecutive terms. Before this he was an awarded five star general, having served dutiful in World War II. His steadfastness and resolve was well established. This unique bobble head of Eisenhower is made from the highest quality resin and is perfected, without a blemish. The craftsmanship is superior to others as even the precision in the face is so life like. The representation of such a past President is actually remarkable. He was very influential among the American people, and his brilliance in war time did serve his character well as President. Such fine workmanship in a bobble head such as this is exactly what the collector is searching for. One could never forget such a natural born leader who worked tirelessly to ease the troubles following the Cold War. Eisenhower’s goal was World Peace and that was much of his focus during his terms as President. For those who are invigorated by the time period of World War II, this bobble head appears to be the perfect collection piece.