Don't Tread on Me Paperweight 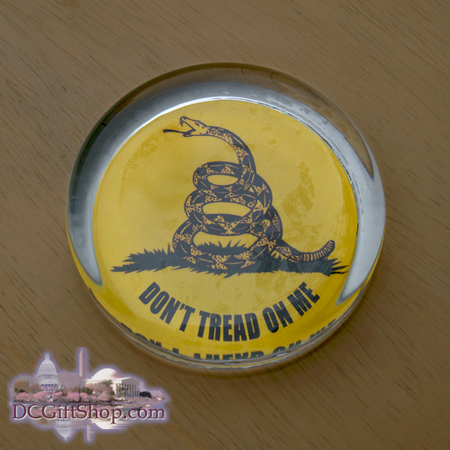 
Widely used during the American Revolution, the DON’T TREAD ON ME flag is considered one of the first flags of the United States. A rattlesnake coiled and ready to strike is seen against a yellow background with the legend "DON'T TREAD ON ME." The flag was designed by and is named after American general and statesman Christopher Gadsden.

In fall 1775, the U.S. Navy was established to intercept British ships carrying war sullies to its troops in the colonies. The Second Continental Congress authorized the mustering of five Marine companies to accompany the Navy on their first mission. The first marines that enlisted were from Philadelphia, and they carried drums painted yellow, depicting a coiled rattlesnake with thirteen rattles, and the motto "Don't Tread on Me." At the congress, Christopher Gadsden of South Carolina served on the Marine Committee that was outfitting the first naval mission. Gadsden presented the newly appointed commander-in-chief of the Navy, Commodore Esek Hopkins, the yellow rattlesnake flag to serve as his distinctive personal standard. Since the Revolution, the flag has been seen as a symbol of American patriotism.