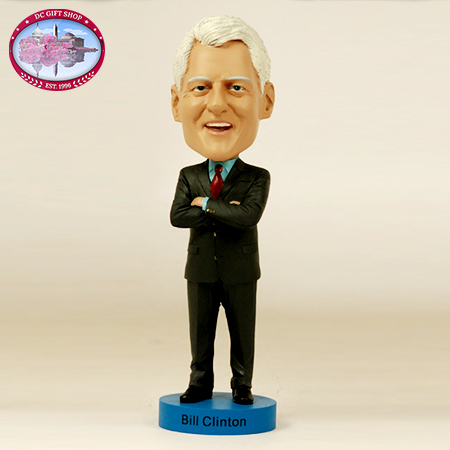 
Bill Clinton held a prolific place in politics before becoming the 42nd president of the United States in 1993. He had profound beliefs and worked excessively hard to instill a work initiative for all. Discrimination was something he also worked to absolve during his presidency.

Further, Clinton served two consecutive terms as well, from 1993 to 2001, though his presidency was laced with some rather questionable activities. Clinton was also the 3rd youngest president in US history, but that didn't dissuade the American people, obviously.

Bill Clinton did balance the financial budget rather well when he was in office. He also increased minimum wage for middle class workers. While his reputation preceded him, he was a reliable and dependable political figure. His administration had the lowest unemployment rate and the most prestigious rise of homeownership for a good while. This bobble head is the perfect image of good ole boy "Bill" with his charming personality coming through on the rather well created face. His resilience is obvious in how he stands. This bobble head was created from the perfect composite materials as well; anything for this distinguishable political figure.

The detail and workmanship is carried out in a way to offer appreciation for the long term. This is certainly a bobble head with appreciative value and worthy of the finest collection too.