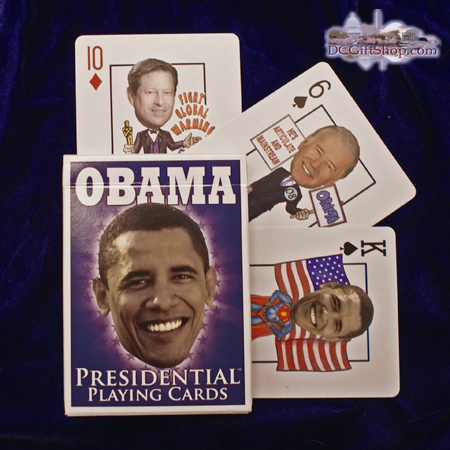 
The Barack Obama Presidential Playing Cards are filled with key members of the Obama camp, such as Vice-President Elect Joe Biden and Michelle Obama, and the Democrat Party as a whole, including Senator Hillary Clinton and John Edwards. The back of the playing cards feature images of the American Flag while the box features the slogan 'Change Can Happen' along with "Barack Obama - 44th President of the United States".

Call your friends over and share some laughs and good-times while celebrating Barack Obama becoming the 44th President of the United States of America. These commemorative playing cards are a great way for the whole family to come together, have fun, and learn current American government and history. The Barack Obama Presidential Playing Cards are durable for a lifetime of playing with family and friends, and come complete with two Jokers - George W Bush and Dick Chaney.