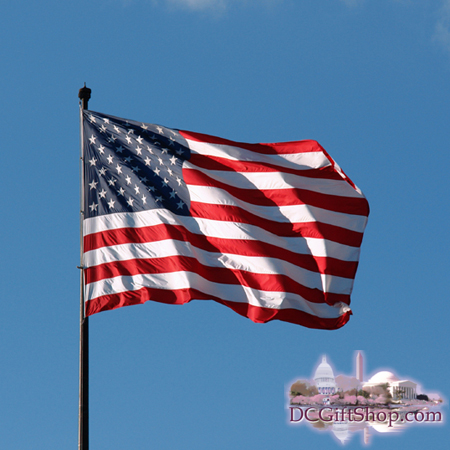 The American Flag consists of thirteen horizontal red (seven) and white (six) stripes and a blue rectangle in the canton bearing fifty small, white, five-pointed stars. The fifty stars on the flag represent the fifty U.S. states and the thirteen stripes represent the original thirteen colonies. The Stars are arranged in nine offsetting horizontal rows of six stars (top and bottom) alternating with rows of five stars.

The American Flag is one of the United States most widely recognized symbols. Many historians understand the American Flag to represent the national government established by the Constitution, along with the rights of citizens promised in the Bill of Rights, and most of all, the symbol of individual liberty as stated in the Declaration of Independence.

Support your country and display your American Flag with pride! The American Flag can be seen throughout the United States displayed on public buildings and private residences.

Looking for a great Washington DC souvenir to remember your trip to the Nation's Capitol? This statue is a replica of the Lincoln statue contained within the Lincoln Memorial located at the west end of the National Mall in Washington, D.C. The statue is approximately 5 1/4" high.

The United States Armed Forces ornament is a small token of how grateful we are to the Army, Navy, Airforce, Marines, and Coast Guard. Since our nation's founding, the primary obligation of the national government has been the common defense of these United States.

The Air Force One Model Plane is a must have for children of all ages. Each 5" wide plane comes with 1 section of flexible modular runway and a collectible information card with facts about Air Force One.