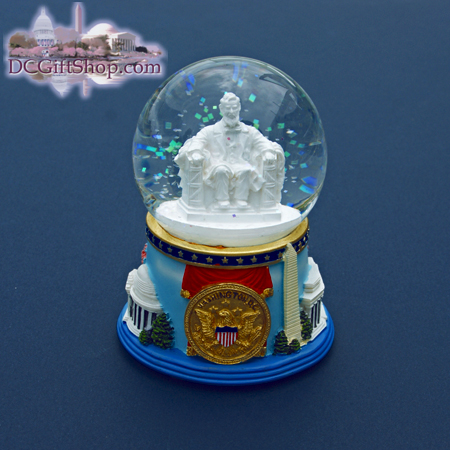 
This beautifully crafted musical snow globe features the famous marble statue of President Abraham Lincoln from the Lincoln Memorial in our Nation's Capitol. Perfect for any cabinet, desk, or mantle, this snow globe stands 4" tall and is accompanied by the musical version of the Star Spangled Banner. The Star-Spangled Banner is the national anthem of the United States of America. The lyrics come from a poem written in 1814 by Francis Scott Key after seeing the bombardment of Fort McHenry during the Battle of Baltimore by Royal Navy ships during the War of 1812.

Surrounding the base of this snow globe are the famous memorials, monuments, and landmarks that make up our The National Mall in Washington, DC along with the Great Seal of the United States. See the US Capitol, Washington Monument, Jefferson Memorial and more with the famous Washington DC Cherry Blossom trees in the background.