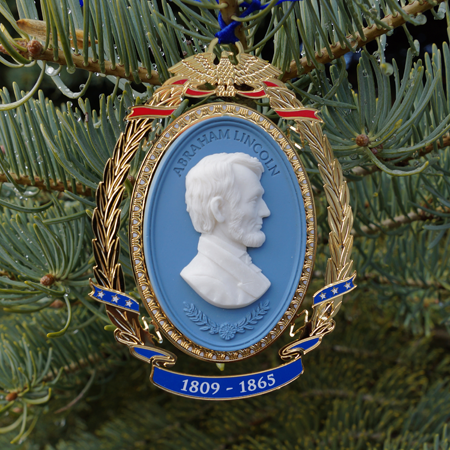 
Considered by many Americans to be one of their greatest presidents, Abraham Lincoln guided the nation through the Civil War. Lincoln despised war but viewed it as the only salvation of the Union. As president, this former Illinois lawyer and congressman ensured the strength of his Republican Party, issued the Emancipation Proclamation granting freedom to slaves, succeeded in the preservation of the Union, and planned for magnanimous peace. In April 1865, Lincoln's life ended at the hands of an assassin, but his hope survived "that this nation, under God, shall have a new birth of freedom - and that government of the people, by the people, for the people, shall not perish from the earth." This Christmas Gift Idea can serve as either a handsome Christmas display or a White House Christmas Tree Ornament. Whether you are looking for a holiday ornament, a tree ornament, or Christmas collectible, this gift will make any Christmas a White Christmas. Own a moment of White House history.