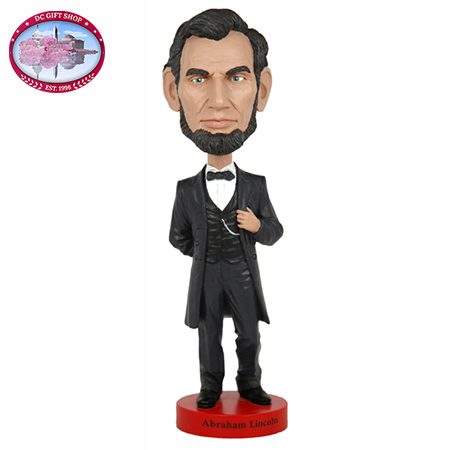 
This bobble head of Lincoln is so very much like how the living man would have looked. The detail has captured everything of Lincoln, from his long coat and friendly expression, right down to his antique pocket watch nestled in his regal jacket pocket. From all historic accounts, he led the Union to victory and helped to establish justice and rights for all. Furthermore, Lincoln was known for his civil rights authority, and the abolishment of slavery; emancipating slaves into free men and women. He was also well known for the public speaker that he was, and he could captivate his audience. The background on Lincoln illustrates that he came from a humble life and was empathetic to his fellow man. This made him well loved throughout history. He was compassionate in every political endeavor he undertook. Because of his popularity among the people, his assassination by John Wilkes Booth was even more devastating to America as a whole. Abraham Lincoln was and is a figure that simply hasn't been forgotten.