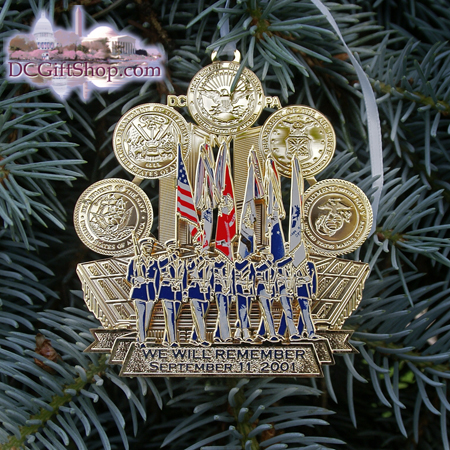 
September 11, 2001 was a day in US history that will never be forgotten due to the actions of a handful of foreign terrorists. This intricately detailed, 24k gold-plated commemorative ornament pays tribute to that dire day more than a decade ago. The foreground of the ornament features 8 color-guard members with their respective military flags standing on a base that says "WE WILL REMEMBER - SEPTEMBER 11, 2001."

In the background of this 3-D ornament is Arlington, Virginia's Pentagon and rising from the Pentagon are the Twin Towers which support the detailed insignias of the Navy, Army, Department of Defense, Air Force and Marine Corps. Bordering the Department of Defense insignia are the abbreviations PA – NY – DC: the respective locations the airliners crashed that dire morning.