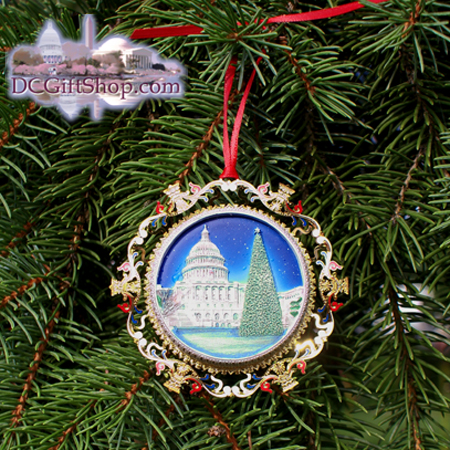 
The 2009 Official U.S. Capitol ornament will make a beautiful addition to any tree or just as a stand alone decoration. The Capitol Christmas Tree has been recorded as early as to 1919 but it wasn't until 45 years later (in 1964) that a definite procedure/lighting ceremony was adopted. Elegant in its simplicity (although intricately detailed on the 24k gold-plated border).

The ornament is made with marble which was removed from the original steps for the House of Representatives in 1995 due to the wear created by the over nine-thousand repesentatives who walked the steps dating back to 1863-1865). The original marble was crushed into dust and combined with resin to create this heirloom-quality ornament. This ornament features a 3-D drawing painting of the Capitol building with a Christmas tree beside her, and is finished in a 24k gold plate.