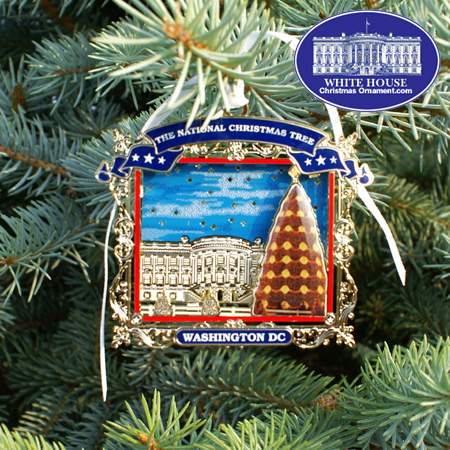 In November 1923, First Lady Grace Coolidge gave permission for the District of Columbia Public Schools to erect a Christmas tree on the Ellipse south of the White House. The organizers named the tree the 'National Christmas Tree'.

From 1924 to 1953 live trees in various locations around and on the White House grounds were lit on Christmas Eve. In 1954 the ceremony returned to the Ellipse and expanded its focus. Local civic and business groups created the 'Christmas Pageant of Peace.' Smaller live trees representing the 50 states, 5 territories, and the District of Columbia, formed a 'Pathway of Peace.'

Center to the season's celebration is the living National Christmas Tree, a Colorado blue spruce from York, Pennsylvania, planted on the Ellipse October 20, 1978.

This Christmas Gift Idea can serve as either a handsome Christmas display or a White House Christmas Tree Ornament. Whether you are looking for a holiday ornament, a tree ornament, or Christmas collectable, this gift will make any Christmas a White Christmas.