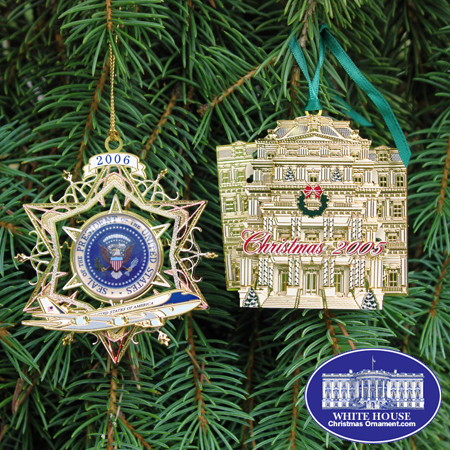 
Miss last year's ornament? You can now purchase the 2005 Secret Service Eisenhower Executive Office Building Ornament along with the new 2006 'Air Force One' Ornament at a discount. Save over 25% on last years ornament when you purchase these ornaments together.

The 2005 Secret Service Ornament is a 24-karat gold-finished brass ornament which depicts Eisenhower Executive Office Building during the Winter Holiday Season. Next door to the White House, the Eisenhower Executive Office Building (EEOB) commands a unique position in both our national history and architectural heritage. In contrast to many of the somber classical revival buildings in Washington, the EEOB's flamboyant style epitomizes the optimism and exuberance of the Post-Civil War period.

The 2006 'Air Force One' Ornament portrays Air Force One flying under the Presidential Seal. An American bald eagle holds a ribbon in its beak; the ribbon has the motto of the USA, "E PLURIBUS UNUM," meaning "Out of many, one." The eagle is clutching an olive branch (with 13 olives and 13 leaves) in one foot (symbolizing peace) and 13 arrows in the other (the 13 stands for the original 13 colonies and the arrows symbolize the acceptance of the need to go to war to protect the country).

A shield is in front of the eagle; the shield has 13 red and white stripes (representing the original 13 colonies) with a blue bar above it (it symbolizes the uniting of the 13 colonies and represents congress). Above the eagle are 13 white clouds, 13 white stars, and many tiny stars. 50 white stars surround the eagle in a circle (on a deep blue field). The words, "Seal of the President of the United States" surround the seal (on a tan field). The gold-plated star surrounds this majestic ornament originate from the hand-painted murals in the White House entrance hall.