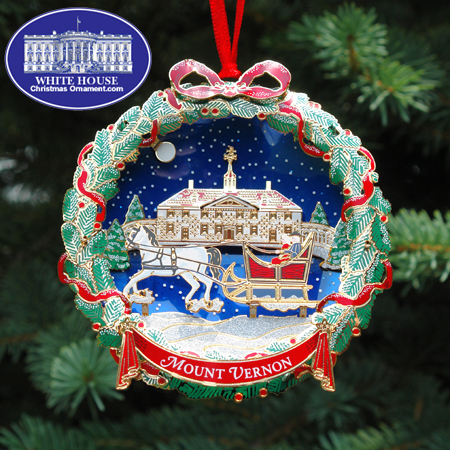 "The appearance of the Weather, reminds me of the use of a Sleigh..." - George Washington, First President of the United States, December 16, 1782

Nothing could be so pleasent as Washington, a moonlit winter sleigh ride alongside his wife, Martha around the young American Republic. Imagine the first of the winter's social gatherings held at the General's Mount Vernon estate. Close friends and relatives would travel by horse and sleigh through the Virginia's gentle slopes blanketed in snow. One could imagine Washington staring at his sleigh and reminicing about his victory over the British army in Yorktown. Attached is a letter Writen by Henry Knox, Washington's loyal officer in West Point, December 17 1782:

Last evening I received your Excellencys favor respecting a sleigh, and inclosing the paroles and on the 22d instant. The sleigh shall be put in train immediately and finished with all possible expedition.

The 2006 Mount Vernon Christmas Ornament is a hand painted depiction of George and Martha Washington taking a sleighride around Mount Vernon estate under a moonlit night. A red ribboned wreath surrounds this memorable scene.