2004 George Washington at the Palladian Window 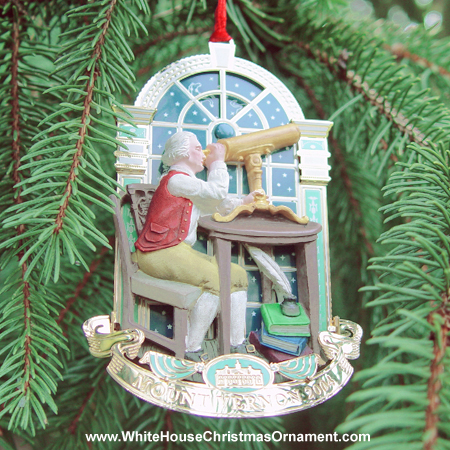 The cycles of nature fascinated Washington throughout his life, and he was a keen observer of the seasons, the weather, the tides, and the skies. The original design of the 2004 Palladian Window Ornament, depicts Washington star-gazing in the comfort of the large dining room. Mount Vernon's large dining room in particular offered spectacular sightlines of the northern sky. Many of the defining moments of the latter years of George Washington's career, including the knowledge that he had been elected first president of the United States, occurred in this magnificently appointed room.

The dominant feature of the two-story space is the neo-classical Palladian window, inspired by the designs of Italy's influential 16th-century architect, Andrea Palladio. Washington selected the vibrant verdigris color of the pilasters and walls, hoping to smooth the transition from the interior to the exterior and the rich green color of the lawn and trees of the nearby North Grove. Washington looked to the heavens for practical guidance, and a telescope allowed him to search the skies for gathering clouds or distant lightning in the night sky. Though Washington had many such spy glasses about the Mansion, an impressive English-made brass telescope stamped Whitford, atop a tripod base, was perhaps the most prized and powerful. In fact, this handsome telescope appeared in Washington's will as a bequest to his close friend Dr. David Stuart. Today it can be seen in the study, but Washington likely transported it about the house for the best views. The beautiful Palladian window still frames a view of the Mount Vernon landscape, leaving millions of visitors with the impression of simple, understated elegance, which many feel is a reflection of George Washington himself.