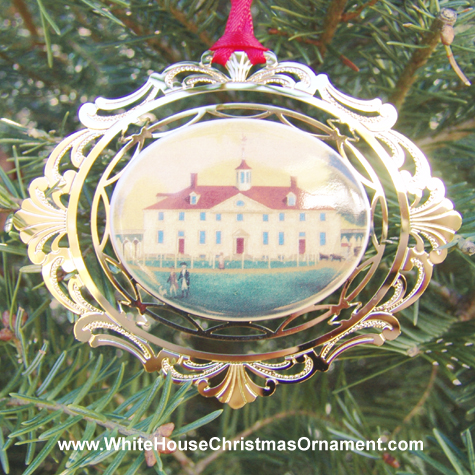 
This ornament depicts one of the earliest known views of Mount Vernon, a 1792 painting attributed to Edward Savage. Completed during Washington's first term as president, the painting shows the west front of the Mansion, with a family group in the foreground. George and Martha Washington took up residence at Mount Vernon after their marriage in 1759. When Washington accepted the appointment as commander in chief of the Continental Army in 1775, he left his home and would not return for eight years. On December 24, 1783, after resigning his commission in Annapolis, George Washington rode horseback to Mount Vernon for a glorious homecoming, just in time for Christmas. This oval porcelain ornament is set in 24-karat gold-finished brass. The back is engraved with Christmas 1993 and the words: Painting depicting the west front of Mount Vernon, the home of George Washington, attributed to Edward Savage, 1792