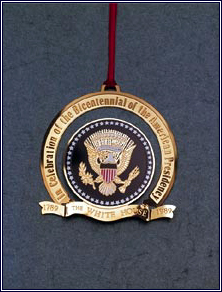 
The 1989 Bicentennial of the Presidency Ornament is a recreation of the seal used by the White House. The original seal was personalized for the exclusive use of Rutherford B. Hayes, 19th President of the United States of America. Today’s Holiday Ornament has been continued by popular request, marking the 200th anniversary of the Presidency.