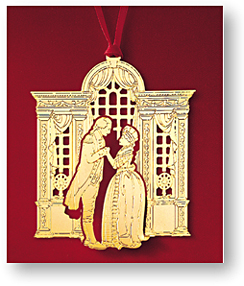 
The holiday season held special meaning for George and Martha Washington. The couple chose Epiphany, the 12th day of Christmas, for their wedding. During the early years of their marriage, Washington enlarged and expanded the home that his father had built. The last addition to the Mansion was a large dining room, dominated by a striking Palladian window. Washington planned the new wing just before the Revolutionary War, but the room was not constructed until 1776.

A happy holiday homecoming took place on Christmas Eve of 1783, when Washington finally returned home after resigning his commission at the end of the war. This 24-karat gold-finished brass ornament depicts George and Martha Washington in front of the Palladian window.