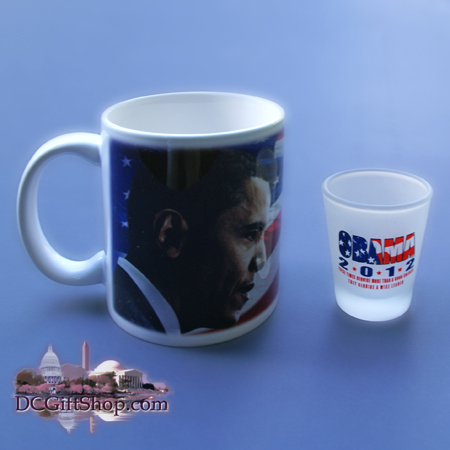 
DC Gift Shop is taking our campaign gifts to the polls. It is up to you whether the Obama or Romney gift set wins.

The Obama gift set comes with a patriotic red, white, and blue themed coffee mug and shot glass. The coffee mug comes with a portrait of President Barack Obama with an American Flag background with the words "OBAMA 2012" and the campaign slogan, "These Times Require More Than A Good Soldier They Require A Wise Leader". The shot glass has a campaign theme with the words "OBAMA 2012" in red, white, and blue and also includes the campaign slogan listed above.

Show your support for the Democratic Party and Barack Obama and cast your vote in our presidential poll by purchasing the Obama gift set today!