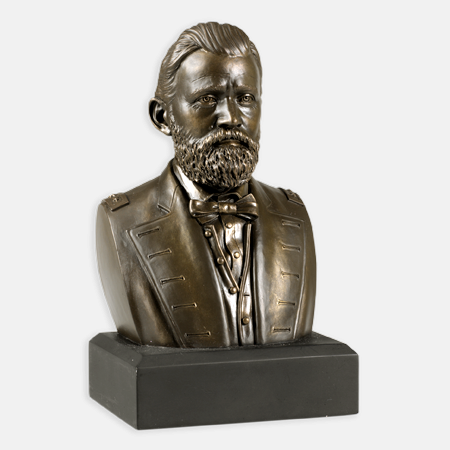 
Ulysses was born April 27, 1822 and became the 18th President of America. During his term he led the group known as the "Radical Republicans" in continuance of the abolishment of any signs of Confederate nationalism. During Grant's time as president the goal to remove slavery was carried on in the South of the county. This bust of the 18th President is a perfect likeness of him. He is distinguished in his military dressings, with even the finest details of his bow tie in place. The face addresses his stern resolve as when he was a military commander. Ulysses was known for his leadership and strength. He served two terms as Commander and Chief of the America's, proving his loyalty and dedication. While many historians gave poor rankings for Ulysses as President; his successes with his International policies, and his civil rights achievements still hallmarked him as a great leader. One of the greatest achievements was his International Arbitration which helped to avoid war with Spain. This unique and well created bust preserves Ulysses S. Grant a place in history.