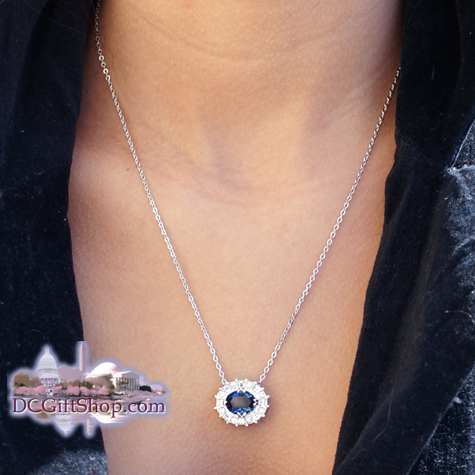 
Our Austrian crystal pendants are adapted from the original Hope Diamond. Eight round and eight princess cut crystals surround the center blue crystal. The original 45.50ct. diamond is known for its rare, deep blue color and for its dramatic history. The stone that became the Hope Diamond was purchased in India by a French merchant traveler who then sold it to King Louis XIV of France in 1669.

After a succession of sales and acquisitions, it was purchased by Evalyn Walsh McLean of Washington, DC, the last private owner. Harry Winston, Inc., acquired the Hope Diamond from Mrs. McLean's estate in 1949 and in 1958 donated the diamond to the Smithsonian Institution in Mrs. McLean's original setting.

The Hope Diamond is on permanent display in the Harry Winston Gallery in the Janet Annenberg Hooker Hall of Geology, Gems and Minerals in the National Museum of Natural History.