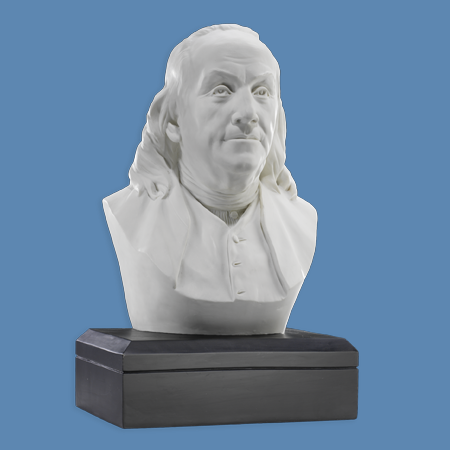 
Born in 1706 to 1790, Franklin was a prominent figure in many facets of history. He was a friendly and popular politician throughout the world. This 6” white bust is reminiscent of his character and energizing personality. Franklin had a love for reading and learning in general, which is what assisted him throughout his life. The etched details of the face, to the hair itself are identical to the real life image of this man. Even Franklin’s furrowed brows are evident on this unique sculpture. He was well known on his stance for freedom for all and compassion for scientific ventures as well.

While Franklin did begin from humbling beginnings as a soap mason’s son, he progressed on his own through the mid 1700’s to the late 1700’s, winning favor with country’s such as France and others. It was Franklin’s diligence that created his success and favor among many. He is and was truly representative of what America is all about.