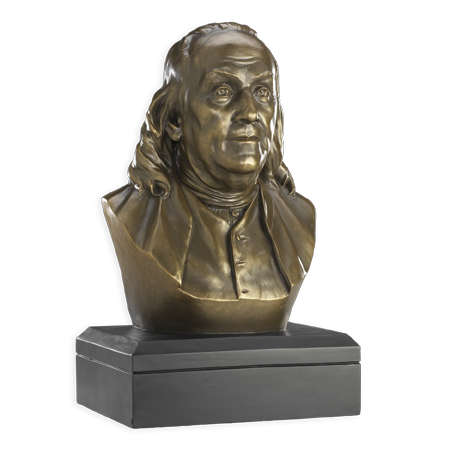 
Benjamin Franklin was genius in science, writing, and leadership. His soft countenance is exemplified on his honorary bronze bust here. Known for his empathetic understanding of his fellow man, Franklin is well known for his earnest endeavors throughout his life. In 1743, Benjamin Franklin birthed the Philosophical Society, one of many of his great achievements. Even on this immaculately presented bust, his look of concern for the plight of life is obvious. Franklin’s election into the Second Continental Congress, and his role in the signing of the Declaration of Independence held prolific meaning then and even today. Franklin’s personality was friendly and down-to-earth; many saying down right contagious. When viewing this perfect bronze image of the man one can’t help but notice the finer details which are so lifelike and familiar about him. It is a great piece to have within an invested collection of history.