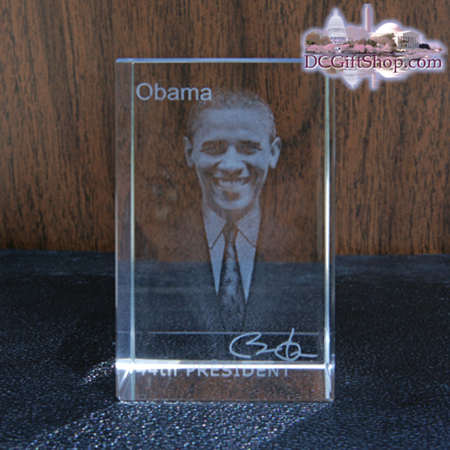 
Celebrate your patriotism with this detailed 3-D, LASER engraved image of President Barack Obama. This paperweight also includes Obama's signature and the text "44th President" at the bottom. This paperweight will add class and elegance to any office.

Barack Obama, born August 4, 1961, in Honolulu, Hawaii, is the first African American to hold the title of Commander-in-Chief in the United States. Before becoming President, Obama served as a United States Senator from the state of Illinois.

During his administration, President Obama has ended the war in Iraq, signed a new arms control treaty with Russia (New START), and ordered the military operation that resulted in the death of Al-Qaeda leader Osama bin Laden.